“Gold Standard: American QuickSilver (AQS) introduced this new line of holders for pneumatic scoring knives, which typically are used in equipment for film slitting and perforating. In such equipment, the knife holder is mounted on a bar above the film and attached to an air source. Gold Standard holders are compatible with knives from AQS and other suppliers.

What’s new: The titanium coating, which the company says is an industry first. The coating is harder than previously available black oxide and nonstick coatings, as well as being harder than the knife itself, which makes the holders especially suited for use with abrasive materials.

Benefits: Wear and heat-resistance. Also, the coating protects against corrosion and warping of the holder, and reduces friction when the knife is operating.” 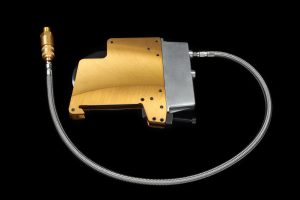